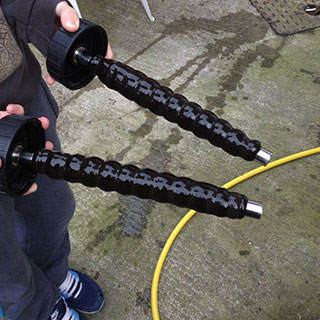 A power flush is a cleansing process which aims to remove deposits of sludge, rust and any other debris from your central heating system. These contaminants, if left, can seriously affect the efficiency of a heating system and in severe cases a power flush is the only option available.

There are a number of signs to look for before deciding to go ahead with the power flush process. These include cold areas on radiators, excessive noise from the boiler or the heating system pump, discoloured water when you bleed the radiators and the slow warming of the heating system. You might also notice the tap water getting cloudy, especially if there is a build up of limescale as well.

It is also recommended that the power flush process is carried out if you intend to connect a new boiler replacement to an old heating system. This is because most new boilers are condensing boilers and any contaminants already present in the heating system can quickly damage the internal pipe work of the new boiler.

The overall aim of a power flush is to restore the full circulation of water around the central heating system, however, it can also eliminate noise from the boiler and the pump as well. This means that the entire system has to be flushed in order to get the best results.

A heating engineer will connect a powerful high flow/low pressure pumping unit to the central heating system – either to the circulation pump in regular boiler systems or the pump head in combination boilers – and with the help of high strength cleansing chemicals will flush out anything in the system.

The chemicals used during a power flush include a sludge crust breaker and remover to help get rid of rust and sludge, a descaler to break down limescale and a corrosion inhibitor to stop further rusting from occurring. The crust breaker and remover are acid-based so that they help to combat any rust present and any other debris, such as sand particles, that might have settled in the radiators, pipes and boiler. At the end of the process there is no acid left in the central heating system’s water.

Back to the Blog

We offer call outs to all of our customers

Get a free quote today!

All of our work is fully guaranteed

ONLY USE A GAS SAFE REGISTERED ENGINEER TO FIT, FIX AND SERVICE YOUR GAS APPLIANCES